Though we established enough of a routine to feel very much at home in Yuma, we never got bored, partly because of all the special events that are held during the winter months.

The tamale festival, held annually in Somerton, brought out dozens of tamale makers — booths  lined the main street, each with their own tamale recipe. No way to eat them all, so we tried a few and did find our own favorite — even taking some home. The tamales were so good I nearly forgot to take a photo of the event, snapping this pick as we were leaving, and catching just an edge of the festivities: 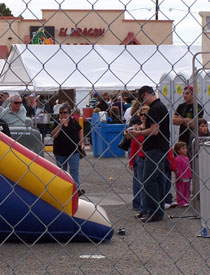 The Yuma Lettuce Days festival was also held while we were in town, so we wandered the booths to shop, people-watch, and gander at the “world’s longest salad bar.” So appropriate for this lettuce-growing city.

And San Luis, on the Mexican border, had an international festival that went on despite rain (! yes, rain in the desert!). We were too early for the stage shows, so walked the rows of booths before heading back to the dry truck. We’d hoped to find some great Mexican food but nothing caught our eye, and the event was something of a disappointment — too bad, given all the work that goes into pulling something like this together — though we did see a bit of a town we might not have visited otherwise.

Another International Festival was scheduled for April at the Civic Center, but when we got there we found a rousing Spanish-language church service about to start, but no festival. As so often happens, the adventure we thought we were going to have that day turned into another one entirely, as we ended up in deep conversation with Art, a Civic Center employee we met while looking for the cancelled festival. A former restauranteur and life-long resident, Art explained the amazing local water system (and its inherent politics, given the fact that most of Arizona is water needy), the area’s history, and suggested a Mexican restaurant which became our favorite Mexican restaurant (this was the third time in as many months we had a new favorite Mexican restaurant). Wherever you are, Art, thank you!

But the biggest and best festival of all was the MCAS Air Show — more on that next time!

Fiction writer and photographer, I travel the country with my sweetheart of a husband as a "full-time RVer."
View all posts by Ellen →
This entry was posted in Attractions, Food and tagged Yuma. Bookmark the permalink.