With all that Duluth has to offer, you might think we spent all of our time across the bridge from Superior, Wisconsin. We didn’t. Although both cities share the basic description of port towns, their personalities are very different. While Duluth is decidedly more urban, Superior is the working class counterpoint. Where Duluth’s culture suggests a focus on healthy well-being, Superior was once (and might still be, for all we know) known for having the highest per capita ratio of bars to residents. You can drive the deserted (during the day…) downtown streets and see bar after bar, shoulder to shoulder.

But that’s not what we appreciated about the city. We fell in love with its bike trails, particularly the Osaugie Trail, which ran parallel to Harbor View Parkway. We parked at the lot at 18th Avenue East and road in different directions on different days.

Heading southeast, the trail is more rural, following Superior Bay past this structure that I could name if I knew more about the shipping business…

… and the farther down the trail we rode, the more rural it got: 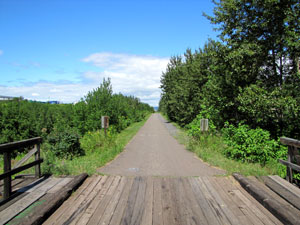 But as you can see from these photos, we didn’t have to worry about sharing the trail! We did pass a few people walking dogs (must be on a leash, and people seemed to abide by that, thank goodness) and pushing strollers, but generally we had the trail to ourselves.

This meant we had plenty of time and space to stop along the way and take in another one of those mysterious shipping structures: 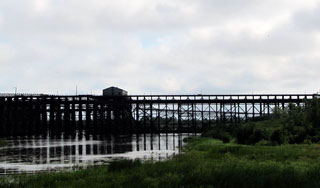 Back at the boat ramp, signs and more signs alerted fishermen about invasive species, boat ramp etiquette, minimum size for the Trophy Muskellunge (50″!)… If you’re coming to fish, allow a few extra minutes to read all of the signs.

The park at the end of 18th Avenue E marks the spot where a stockade was built as a result of a Sioux “uprising” in Minnesota in the summer of 1862. It’s not clear from the sign (at least to my reading of it) who, exactly, was retained here but it does say that “the Chippewas residing in this vicinity remained friendly to the whites” and that by 1863 most of the soldiers had left Superior (called to fight in the Civil War, no doubt) and “eventually the stockade was abandoned.”

Heading from our parking spot northwest along the trail, we got some great views of Duluth in the distance…

…and the Whaleback Museum near restaurants and shops that were closed down when we were there, victims of the poor economy.

Whaleback freighters were invented by Captain Alexander McDougall of Duluth and were nicknames “pigboats” by their crewmen. Though made with lighter, cheaper materials, the tubular hull of a whaleback meant it moved more efficiently through the water, so it used less fuel and was therefore less expensive to operate.

So what caused the demise of a ship that seemed so ideal? Technology. When unloading processes and equipment changed around 1900, the deck hatches of the whalebacks were too small to work anymore. The James B. Colgate, shown here, “foundered during the ‘Black Friday’ gale on Lake Erie on October 20, 1916,” according to a marker at the Lake Superior Marine Musuem in Duluth. The Colgate was the last of the whalebacks, having served the Great Lakes for 24 years.

If you travel along the water at all, you can’t help but appreciate all the communities that dedicate memorials to their lost seamen. Superior’s monument is as bold as the seamen it recognizes… 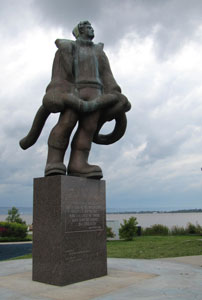 …and its sentiment is simple and moving. “Dedicated to the Seamen of the Great Lakes,” it reads, followed by this sentiment by John Frank Leino: “I challenge the deep with God as my helmsman, courage my vessel, and the love of those who wait on shore…my strength.”

The waterside ampitheater brought out the entertainer in Bob, who sang for his greatest fan — me! 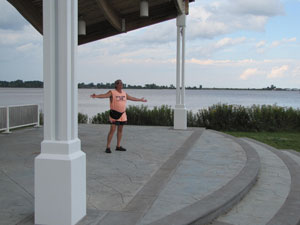 What did we eat while in Superior? Thought you’d never ask. We’d heard about Sammy’s Pizza downtown, and when we finally found it we discovered it wasn’t open until later. So we opted for Vintage Italian Pizza (V.I.P.), also downtown. The food was great, service was super (it probably helped that the place was pretty empty), and the Wisconsin-made ginger ale definitely worth trying — not too sweet, with a strong ginger flavor.

But the best things about VIP? Down the back hallway…

… you’ll find a series of amazing murals that make you think (if you center yourself just right and stare long enough) you’re in Venice!

Even better? Here’s a peek inside the women’s restroom (NOBODY was in there when Ellen took this pic), decorated like I’ve never seen a restaurant restroom before:

Fiction writer and photographer, I travel the country with my sweetheart of a husband as a "full-time RVer."
View all posts by Ellen →
This entry was posted in Attractions, Bicycling, Cool Experience, Food and tagged full-time RVing, Superior, VIP Pizza, whaleback freighter, Wisconsin. Bookmark the permalink.

2 Responses to A Superior Experience!