We move our house all the time… but moving a town? That seems crazy. Yet it’s happened. Although Valdez probably isn’t the only town that’s moved, it’s story of why is an interesting one.

Known as the “Good Friday Earthquake,” Valdez was rocked by a 9.2 earthquake (still the strongest ever experienced in the US) in 1964. The Old Town Valdez Museum on Hazelet Avenue houses displays and shows a movie that explain how Valdez’s original location — about four miles from its current site — was sited right at the base of a glacier. Remember, back in the day, towns sprang up because of their convenient locations — and in this case, the glacier was the best through-route to the gold fields. Over the years, the town grew.

when the quake hit, the combination of the quake’s strength and the precarious location of the town over such unstable land meant disaster. Interviews with residents who lived through the trauma bring those very long five minutes to life. We were riveted. 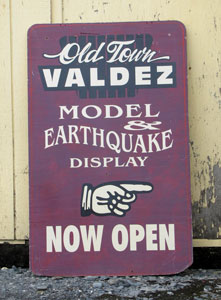 Residents decided to rebuild on more stable ground, and designed a central “parks strip” through the middle of town, and those green spaces (or white, depending on the season) are respected to this day.

The Valdez Museum, on Egan Drive, is easy to spot with the Perry sitting out front: 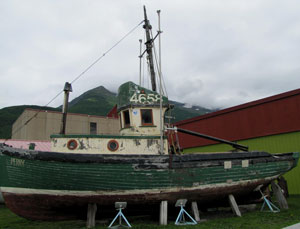 The Perry is an especially good choice as “flagship” for this town and its museum. Built in 1939, it survived the 1964 earthquake (it was docked in Cordova at the time), and was later used to help in the clean up after the Exxon Valdez oil spill, which the museum covers with a dramatic display and stirring film. (If only the seating were a bit more comfortable for middle-aged folks like us!)

If you’re really into experiencing a bit of history yourself, you can still down a drink at Mike’s Palace, the place where the Exxon Valdez captain swallowed his fateful “one for the road” (one for the sea?!?). 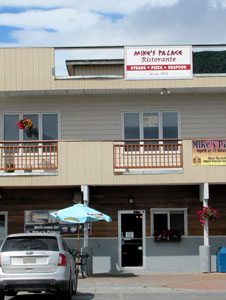 We walked in, but the musty smell mixed with alcohol doused our appetites as soon as we crossed the threshold, so back out we went.

A better choice in town for lunch was the Fat Mermaid, right across from the harbor… 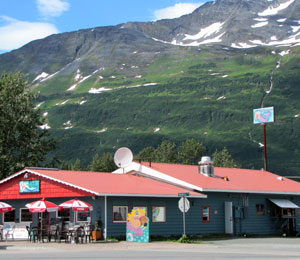 …but the best choice was Oldtown Burgers, with fish and chips (nearly as good as the fresh-caught halibut we found in Homer) among other awesome choices.

Though we hadn’t tried the place at first, mostly because its name suggests it specializes in burgers (maybe it does, but its seafood was excellent), it became the place we went for every restaurant meal after that. Just as the TripAdvisor comments say, it’s a work in progress with its unfinished wood and picnic tables, the atmosphere is casual and friendly, and the food (have I said it already?) is awesome.

But we had much of Alaska to see, so it was back up the Richardson Highway to reconnect with the Glenn Highway in Glennallen. And what gorgeous views we had along the way! 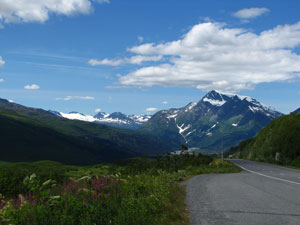 Fiction writer and photographer, I travel the country with my sweetheart of a husband as a "full-time RVer."
View all posts by Ellen →
This entry was posted in Attractions, Food, Interesting Stories and tagged Alaska, Bayside RV Park, Fat Mermaid, full-time RVing, Oldtown Burgers, RV lifestyle, Valdez. Bookmark the permalink.