When you’re in Amish Country, you know you’ll see horses and buggies, and on a summer day you might be lucky enough to spot barefooted kids running through open fields in an image that could be right out of the 1800s. 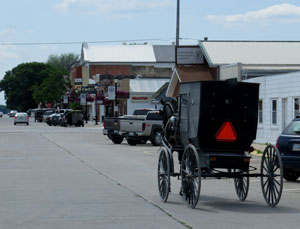 Kalona, Iowa, has all that, but it’s only a sliver of the picture. This little community, south of Cedar Rapids, was settled by the Amish long before the “English” ever arrived, and over the years a culture of cooperation as evolved.

We spent time among Ohio’s Old Order Amish years ago and while we were treated cordially by the Amish, there always existed a sort of invisible barrier between us. Here in Kalona, that barrier seems nonexistent. These Iowa Amish waved from their buggies as we approached in our Jeep, smiled and said hello on the streets of town. 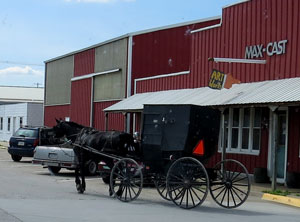 What wasn’t any different between our Ohio and Iowa experiences was — you guessed it — the great food. Amish women know cooking and baking like nobody else can do it, especially when it comes to those recipes that call for lard, bacon fat, and other delicious but eat-in-moderation ingredients! We found the fantastic Golden Delight Bakery where we bought fresh-baked bread, pie (who could resist?!?) and something we’ve never seen before: Sweet Potato Butter. You know, like Apple Butter, but this was made with the tuber. Stretches my vocabulary to describe how delicious it is, so I’ll just write: OOOHHHH!

Don’t bring a diet to Kalona. Bring your appetite and a plan for taking off any extra pounds after you leave or you’ll miss much of what this little corner of the world offers.

Quilters will find a haven of like-minded women here as well. Several shops sell quilts and supplies for the do-it-yourself-ers. For those of us who just appreciate the skill and history of quilts (I still remember spotting remnants of favorite dresses in the quilts my Granny made and sent us when I was little), the sidewalks in town provide an education:

A plaque by each design, formed by bricks of various colors, gives the name of the square, and a brochure available locally details each square for anyone who wants to do a walking tour and see them all.

So what do you do in a such a small community, after you’ve filled your belly and walked the quilt-block sidewalks?

You go to the weekly cattle auction! We would have gone to the horse auction, but it’s held just once a month and we’d missed it during our visit. Even so, the cattle auction fascinated me.

I’m not sure I can explain all the intricacies, but here’s what I noticed. The cattle around rounded up in the back stall areas and when a man on the left opened a door, they rushed out. Sometimes a group stormed into the arena (like the one of eight, above), and sometimes a single cow tromped out, confused to be the object of so much attention (although this one seemed to recognize someone in the crowd):

Bidding was fast — so fast it was hard to keep up with whether they were still bidding on the animal in the ring or the next herd that came through the gate. Even the gal keeping score (see the monitors over the auctioneer’s booth?) seemed to have a hard time keeping up. But the bidders and auctioneer were in sync, and that was the important thing. This animal was either contemplating whether it could get out the way it came in, or hoping it wouldn’t end up like its cousin mounted on the wall:

Nearly as soon as the cattle were in the arena they were rushed out again through the door on the right.

Sometimes a bidder wanted the lot but not one particular animal, so the two wranglers in the pen smacked and poked at the herd to separate the one. If it managed to get through the door into the back nether regions, it took a few extra minutes to bring it back out. We stared at an empty pen, entertained by the yelling and banging coming from the back stalls.

What was amazing was to think that they did this every week — so many cattle! And maybe I’m unfairly stereotyping these animals, but we seemed to be seeing beef cattle (above) and dairy cows:

I’m really revealing how much I don’t know, aren’t I? Maybe the black and white cows are beef cattle, too….

In any case, after about an hour and a half, those eyes that seemed to plead with me to rescue them into another world got to me:

Or maybe it was the smell… ! 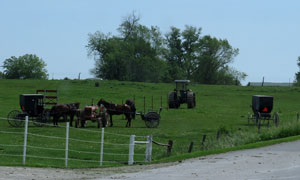 Fiction writer and photographer, I travel the country with my sweetheart of a husband as a "full-time RVer."
View all posts by Ellen →
This entry was posted in Animals, Attractions, Cool Experience, Food, Interesting Stories and tagged Amish, full-time RVing, Iowa, Kalona, quilting, RV lifestyle. Bookmark the permalink.