Again this year we spent part of our “winter” in the desert southwest, crossing state borders and following the weather. I’ve probably mentioned it before, but when we set out on our never-ending journey (while always staying at home… what a concept, eh?) I sort of expected we’d always be in wonderful weather as long as we stayed south of, say, Kentucky.

That’s the thinking of a Great Lakes gal, anyway. Having spent winters in ice, snow, sleet, and freezing temperatures, braving blowing snow and black ice to get to school and work, I somehow thought as long as we kept to the southern edges of the US we’d be able to stay warm and dry through the winter months.

Oh, boy, was I naive. I knew my geography, but I didn’t know my meteorology.

I’m making this confession as a warning to others contemplating the full-time lifestyle: If you plan to stay on the road year-round, expect bad weather. Nearly every state has some form of “winter weather.” Even if you’re traveling too far south for snow (though some years the snow line creeps a lot further south than the Mason-Dixon Line), you’ll likely run into thunderstorms, freezing rain, hail, flurries, windstorms, chilly fog, drizzle, and downright frigid temperatures. 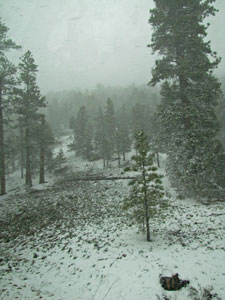 Some full-time RVers are up for that. But our goal when we started was to stick to the moderate temperatures and pleasant weather whenever we could. Sure, we’ve had our share of sudden squalls — both sandy and snowy — but if we can avoid Mother Nature’s bad side, so much the better.

Mother Nature seems to like the desert Southwest (though maybe to balance things out — so she doesn’t seem to have a “favorite” — she’s been withholding her precious precipitation from this part of the continent, resulting in a terrible drought).

As near as I can tell, SoCal has these four seasons: 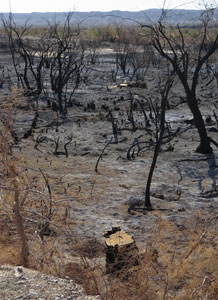 And Southwestern Arizona, around Yuma, has two:

So it makes sense to us to hover around this area through the season known in other parts of the country as “winter.”

That doesn’t mean we’re always able to avoid Mother Nature’s blustery side, but we do get to see cool things, like fog in the desert on this chilly Yuma morning: 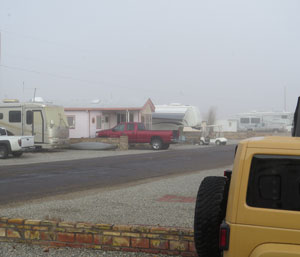 Slowing down during this part of the year gives us a chance to wax the rig (can you see the difference?):

And we think about where we’ll go when things up north thaw out (an entire continent to choose from!). In the meantime, we take time to explore this part of the country, all while being able to enjoy weather that lets us get outside to hike, swim, and relax!

Fiction writer and photographer, I travel the country with my sweetheart of a husband as a "full-time RVer."
View all posts by Ellen →
This entry was posted in Interesting Stories, On the Road, RV Parks & Lifestyle and tagged full-time RVing, RV lifestyle. Bookmark the permalink.