We’ve been to rodeos before — most notably in Cody, Wyoming, more than fifteen years ago — but when we came upon this one, we had to go. This was a small-town affair, but no less important to those competing: points are points, and winning a coveted belt buckle is special no matter where you earn it.

After so many hot days, this day’s early, chilly rain was a nice change for us. We bundled up in layers topped with rain jackets, paid our few dollars to get in, and plunked our butts high enough in the stands to get a good view of the rodeo grounds. Before long, the opening procession began and featured the Skagit Rein Riders, a women’s precision drill team: 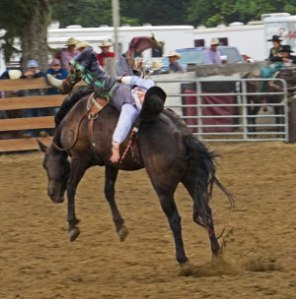 …any way they could:

… and either managed to rope and tie the animal…

…or it escaped and one of the rodeo princesses wrangled it:

Women competed in a similar event called breakaway calf roping. It starts much like the men’s event, but cowgirls don’t wrestle the calves to the ground and tie them up… they just need to lasso the calf at break-neck speed. It was a very fast event — each contestant in the ring about five seconds!

And of course we were entertained by the antics of the rodeo clown.

Kyle Body had always wanted to be a rodeo clown but first attended bullfighting school (did you even know there was such a thing? I sure didn’t). “About a year after fighting bulls… I decided I would also pursue the life of a barrelman, so I bought myself a barrel and some face paint,” he said. (I also didn’t know rodeo clowns are also called “barrelmen” — so much we learned that afternoon!).

His accomplice didn’t get any credit in the program, but she played an important part in this skit: 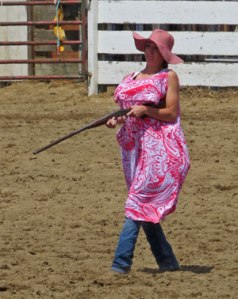 Have you ever seen so many white cowboy hats in one place before? 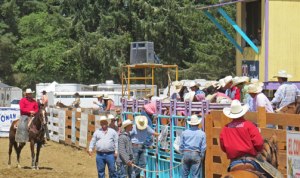 The kids in the crowd climbed wherever they could to get the best views: 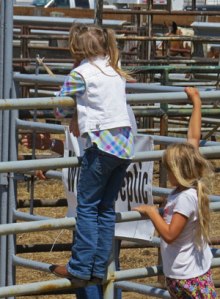 Something else we learned: not only is the rider scored, but the animal gets a score, too — like every time the animal changes direction it scores more points. More to this bronc riding than meets the eye:

Sometimes it doesn’t go all that well. These bronc riders sure know how to fall off a horse in the best possible way!

Steer wrestling is the fastest event in a rodeo — the current world record (unless it’s been broken since July!) is 2.4 seconds. I had to snap fast to get a photo:

Take the coordination, timing, and equestrian choreography required for any single-cowboy event and multiply it by at least two and you get what it takes for team roping. Two cowboys, one quick calf, some fancy rope work, and voila! 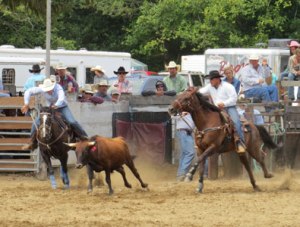 The clouds had cleared, we’d pretty much dried out, but those bleachers get pretty uncomfortable after a few hours, so we called it a day.

What happened to trying to get to the beach for cooler weather? Well… this *was* on the coast! Maybe I’m too much of a midwesterner at heart, but I was surprised to find a rodeo like this one on the Pacific coast: The Peninsula Saddle Club’s 70th Annual Long Beach Rodeo in Long Beach, Washington. Watching a rodeo this close to the roar of the ocean was great fun!

Fiction writer and photographer, I travel the country with my sweetheart of a husband as a "full-time RVer."
View all posts by Ellen →
This entry was posted in Animals, Attractions, Cool Experience, Interesting Stories and tagged full-time RVing, rodeo, RV lifestyle. Bookmark the permalink.