Full-time RVers know this is no vacation, despite how many times people say they want to do this because “it would be great to always be on vacation.”

We once thought that, too. “Ah! We’ll travel where we want, when we want… if we don’t like the neighbors we’ll just move….”

Well, that’s mostly true. I’ve already blogged about how making reservations is now the only way you can be sure to be where you want, when you want. Oregon Coast in the summer? You’d better book a year early. National Park when kids are out of school? Same thing. Winters in Yuma? Yep. Make that reservation.

But there’s another reason the “Go where you want, when you want” mantra is a myth: Weather.

The fact is, there are only a few really good travel months in the United States. Not only are there the obvious winter months up north (November through March, with some variation), but there are other seasons to consider as well.

A few years ago we got caught in Tropical Storm Bonnie when it hit the Outer Banks of North Carolina (see my post “My Bonnie Lies IN the Ocean!”)… water, water, everywhere!

And we’ve routinely experienced smoke from wildfires in the late summer and early fall.

Ah… but that’s not the end of it. After sitting out storms in Rapid City and listening to the NOAA alarm go off during the night, we saw the aftermath of fierce winds along I-90 as we drove eastward the next day to Sioux Falls. Billboards were slammed to the ground…

…and grain silos showed signs of having taken the brunt of the storm’s fury: 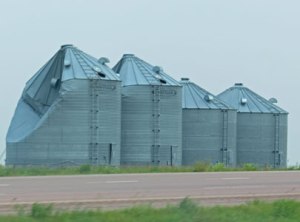 We were glad we hadn’t been in the middle of that!

We’ve seen hail more times than I can remember, in several states…

…and have driven through early summer blizzards (this one was near the North Rim of the Grand Canyon early in our second year of full-timing: 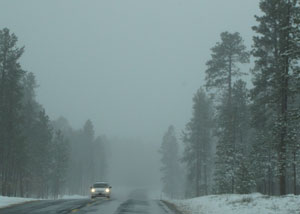 Sometimes you just can’t escape the unpredictable, like tornadoes (which we’ve fortunately managed to avoid) and earthquakes (which we haven’t), but we try our best.

Our first year of full-timing, our intention was to drive across the northern US to Washington state, then head south, which we did.

We landed in Yuma, and though our plan was to keep heading east as the weather lifted, it never seemed to improve. We watched the forecasts, observed the maps, and kept thinking, “Why should we give up this gorgeous weather to head into rain, storms, potential hurricanes and tornadoes?” So we stayed where we were, enjoying every bit of that (and every one since).

So yes, we manage to find mostly great weather all year-round, but that’s making a conscious effort to find the best places in the Lower 48 most of the year.

And the fact is, you still live in seasons, if only two: travel season, and winter.

Next time: Something I have to get off my chest about why, as an RVer, “if you don’t like your neighbors you can move,” isn’t always what it’s cracked up to be.

Fiction writer and photographer, I travel the country with my sweetheart of a husband as a "full-time RVer."
View all posts by Ellen →
This entry was posted in On the Road, RV Parks & Lifestyle and tagged full-time RVing, RV lifestyle. Bookmark the permalink.

2 Responses to No Vacation