So why did I end up dropping off the blogosphere for so long?

Lots of reasons. As I described last time, we’re still traveling, still having more adventures than I could document even with regular postings.

Every day we have at least one adventure. Might be someone we meet. Might be an unusual place we visited, like the great little museum in Ely, Nevada, where we saw this replica of a fossilized prehistoric short-faced cave bear–a very rare specimen. Too cool!

Or, up the road, this amazing, wholly-preserved drug store from the 1970s. When the store closed back then, they simply locked the doors. So, all these years later, the same items are still there. Flashbacks to when they used chalkboards and chalk in school, photo mounts for those albums with black pages, and Breck shampoo!

Everywhere we go, we see signs the marijuana industry is getting a stronger and stronger foothold. Filling up the tank at a gas station in Ely, I saw this sign: 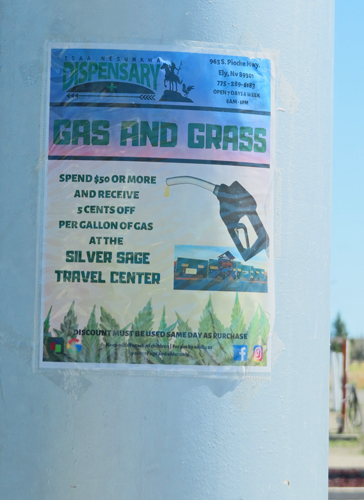 If it’s hard to make out, it says, “GAS AND GRASS: Spend $50 or more and receive 5 cents off per gallon of gas…” For some people that deal is probably better than a gas station discount card.

There’s no shortage of things to write about, that’s for sure. But after all these years, I guess I needed a break. A breather. Instead of blogging, I’ve been using that time to focus on my sweetheart and more on living our adventure than posting about it.

Even so, there are a few hard facts. First, blogging on WordPress had always been easy. Over the last few years, though, they’ve implemented some “improvements,” which likely were welcomed by folks blogging via their smartphones, but which made it more cumbersome for folks like me who prefer working the old-fashioned way — with a camera and laptop. So it took more time and seemed more tedious to put the blogs together.

Add to that we’ve found reliable wifi to be harder to find than it used to be, and blogging became, sorry to say, a bit of a chore. You’d think faster wifi would be easier to get, but it seems more RV parks believe folks are toting their own connections and aren’t giving as much attention to the common signals these days. (We’ve been traveling so long I remember watching “Grey’s Anatomy” on Hulu on my laptop back when Hulu was free and signals were so good we only missed a larger viewing screen. Those were the days!)

(I wanted to give paste in an image as proof but can’t seem to find that ancient photo…. so sorry about that!)

Frustrated with the process of blogging, I used my “computer time” to finish the third installment of the Rollin RV Mystery series, and Superstition Victim is now available!

You don’t have to have read the first two in the series to follow what happens here — and some say it’s the best Walt and Betty adventure yet.

Many thanks to Mason Canyon at Thoughts in Progress for letting me guest post over there!

(Oh… yeah… promoting the book takes some time away from blogging, too….)

Hope you all are well and able to fly away from the nest when it’s safe!

Fiction writer and photographer, I travel the country with my sweetheart of a husband as a "full-time RVer."
View all posts by Ellen →
This entry was posted in Attractions, Birds, Interesting Stories, Superstition Victim and tagged birdwatching, full-time RVing, Nevada, RV lifestyle. Bookmark the permalink.

4 Responses to What Happened, Anyway?

Save! Click the Buy Now button for info on ordering a printed version of Pea Body for just $7.95 (plus shipping and handling).

I love to read, and I love to write reviews and share them with others.